Started the 30th-birthday-celebrations early with these Lovely Ladies.  More to come soon... 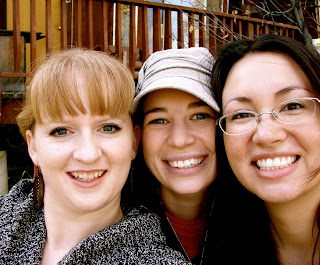 This video comes from my senior year of high school, and I've been searching for it for years. I was so excited to find out that someone finally posted it online! This was the greatest phenomenon of the year.
I love the blue sparkling vests. I love their white tube socks that slid farther and farther off their feet to wildly flap in the air. I love that they were so popular they were asked to perform at a basketball half-time later in the year. I love that it still makes me laugh so hard I cry.
3 comments:

At the end of the day I had an internal debate with myself.  "Was this day better than my wedding day?  Hmmmm."  I'm still not sure which one wins out.  It was a perfect day.

We started with a family and friends breakfast at the church.  Everything was yummy and nice thanks to some little miracle workers called "Mom" and "Dad" and "Becca" and especially "Michael".  They made sure everything was perfect and I can never thank them enough.  We ate and talked and then had plenty of time to take some nice pictures with everyone.  Then he left me and when he came back he was all perfect in white, with a grin and a dimple that still haven't left.

And then we all sat down and they began the opening song.  All I could get out was, "If you don't..." and that was it.  I cried and cried through that whole song and I felt so pathetic but I couldn't help it!  Johnny, my Johnny, wanted to sing "I'll Walk with You" for his opening song at his baptism.  I think he must have the biggest heart in the world and all he wants to do is give it away to everyone else.  Read the words to the song here.  You'll know why I cried.

There was a beautiful talk on baptism given by his Aunt ShaNae.  It was simple and profound and she spoke right to him and he listened with rapt attention.  I've never seen him listen so well.  And then he was baptized.  My little boy was baptized.  He was baptized by his Daddy Michael and how grateful I was that it was the two of them together in the font.  He grinned some more and I cried some more.

Once we moved into the Primary room and everyone dried off and dressed, there was the fabulous Aunt Becca who talked to him about the Holy Ghost and sounded very much like the missionary she recently was.  :) I loved it!  Then came Uncle Stephen who sang "I'm Trying to Be Like Jesus" with Michael's dad, Dale, accompanying him on the piano.  Again - tears.  This was Johnny's favorite Primary song for years and was the first one he learned to sing all on his own.  Stephen has a wonderful and clear voice and he sang in a way that made you really listen and feel the message of the words.  Johnny, sitting next to me in the chair, began to sing along.  He tried to keep it soft, but I heard him sing right along with his Uncle the whole way through.  It was so tender and so sweet to hear.

After that he received the Holy Ghost and another wonderful blessing from his Heavenly Father through his Uncle Seth.  I'm lucky enough to have a Mom that wrote it down in shorthand for us.  Johnny will be lucky to be able to read and reread that throughout his life.  It was amazing to see my family, Scott's family, and Michael's family all in that priesthood circle - all showing their love and support for Johnny.

There was also an unexpected but wonderful talk from Sister Bonnie Parks in the Primary Presidency.  She just made some short remarks about how proud they were of Johnny and how much they loved him in primary.  She said that his testimony and example has really helped strengthen them.  I know how sincere she was and that meant so much to me.  When everything was all said and done there were many hugs, pictures, and even a few gifts.  His Grandma and Grandpa Parkes gave him a beautiful triple combination that he hasn't put down since.  (His Wald side of the family will be getting him a matching Bible, just as soon as this chica can get herself in gear and get down to the store...)

And then... there he was.  Eight years old, baptized, and now utterly responsible for his life.  And I watched him and I knew that he was going to be just fine.  I thought it would worry me, but it didn't.  And it still doesn't.  All I feel is joy and pride and gratitude.

Damien will be baptized in two years.  I'm not sure I can wait that long. 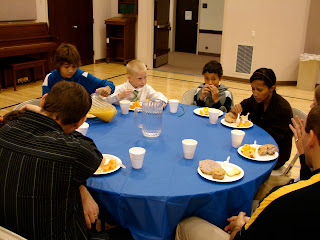 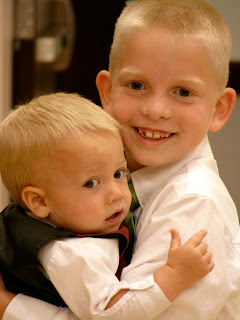 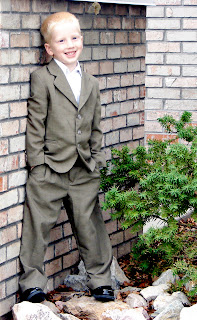 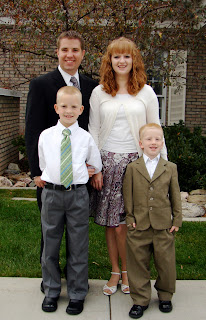 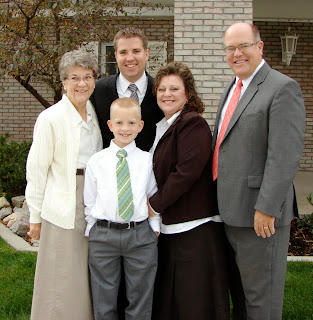 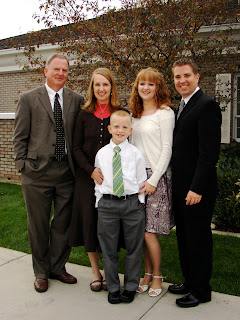 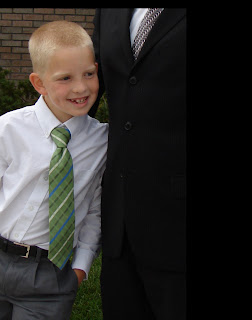 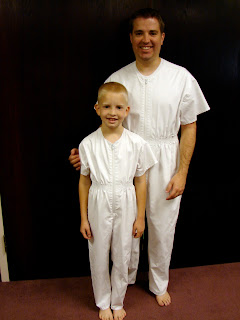 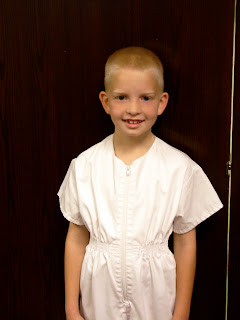 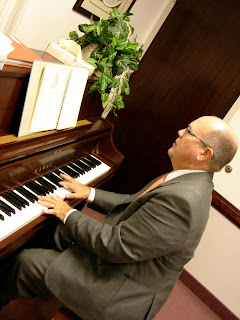 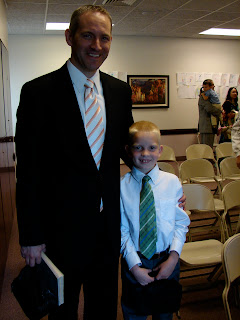 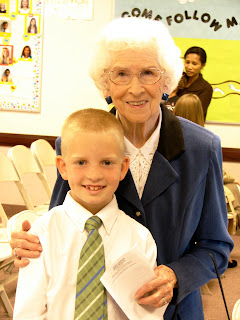 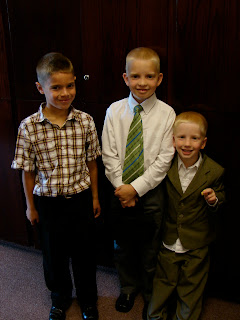 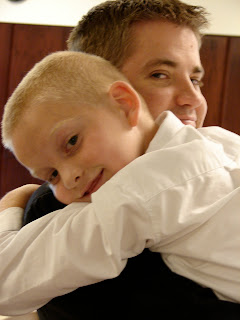 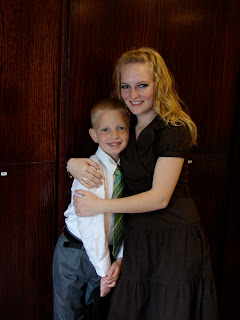 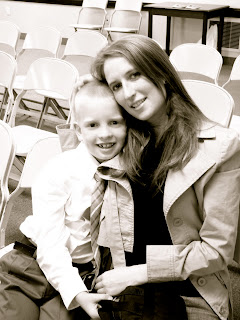 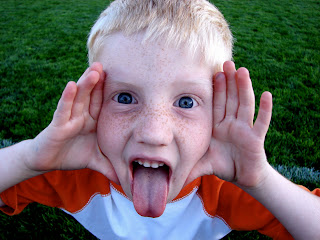 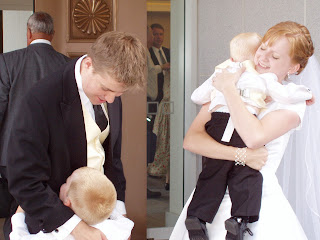 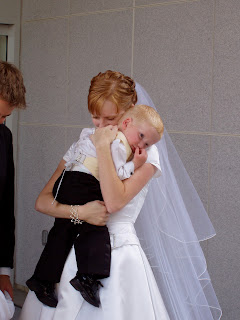 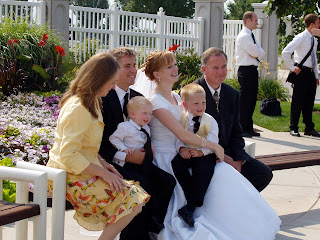 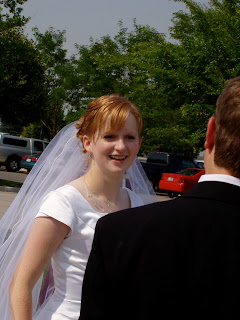 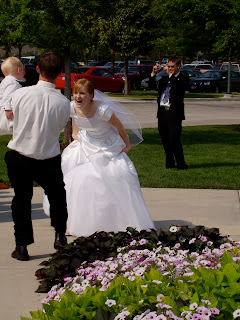 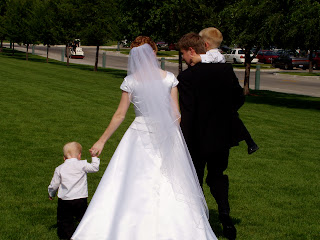 I had never seen these pictures from our wedding that my sister-in-law took - what fun to stumble upon them! Thanks Laura!
No comments:

Emi
Please keep your arms and legs inside at all times and enjoy the ride!

Check out my other blog!